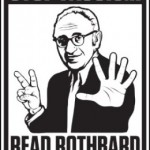 Murray Newton Rothbard was born in 1926 in New York and he was to become the creator of a radical, consistent, and powerful anarchist-libertarian philosophy which would be attacked and praised, loved and hated, fully-understood and appreciated, and feared. Not bad at all. His work has since been refined and expanded by Walter Block, Hans-Hermann Hoppe, and others.

Who, and what, was he? Primarily, Rothbard was an Austrian economist and a student of Ludwig Von Mises. His magnum opus in the field of economic science was entitled Man, Economy and State and was designed as a ‘translation’ or ‘textbook’ of von Mises’ earlier Human Action. Though it was more than just a textbook, as Rothbard himself realised once he began the mammoth task:

The original concept of this project was as a step-by-step, spelled-out version of Mises’ Human Action. However, as I have been proceeding, the necessary elaborations on the sometimes sparse framework of Mises has led inevitably to new and original presentations. Now that I have been proceeding to the theory of production where the whole cost-curve situation has to be faced, Mises is not much of a guide in this area. It is an area which encompasses a large part of present-day textbooks, and therefore must be met, in one way or another. . . . A further complication has arisen. A textbook, traditionally, is supposed to simply present already-received doctrine in a clear, step-by step manner. But not only would my textbook fly in the face of the doctrine as received by 99 percent of present-day economists, but there is one particularly vital point on which Mises, and all other economists, will have to be revised: monopoly theory.

To this day, these two books are the intellectual foundations of the Austrian school of economics, with the possible inclusion of Economic Science and the Austrian Method, by Hans-Hermann Hoppe whom Rothbard himself greatly praised.

Along with Mises, Rothbard was hugely influenced by Ayn Rand. Though, some say that he was more than influenced and that he was an ‘idea-stealer’. Only Randians actually say this, as is indicated by their use of the term ‘idea-stealer’, implying that ideas are property – which they are not. It is true that he was for a period very close to Rand and that he found ‘Atlas Shrugged’ to be ‘an infinite treasure house’, but what Randians claim is that it was Ayn Rand herself who explained the natural rights philosophy to Rothbard and she too who made him a natural-rightser. Not so. Indeed, until very recently, I believed this and so I think it is my duty to publicise Justin Raimondo’s refutation of this Objectivist propaganda:

“The idea that Rothbard needed to be convinced of natural rights by Rand is almost as ludicrous as the delusion that Rand invented natural rights theory. Just as Rothbard’s passion for justice predated the publication of Atlas Shrugged by many years, so the development of natural rights theory predated Rand by many centuries. This point is made, oddly enough, in Rothbard’s fan letter to Rand about Atlas Shrugged, in which he acknowledges that: “When I first met you, many years ago, I was a follower of Mises, but unhappy about his antipathy to natural rights, which I “felt” was true but could not demonstrate. You introduced me to the whole field of natural rights and natural law philosophy, which I did not know existed, and, month by month, working on my own as I preferred, I learned and studied the glorious natural rights tradition.”
This reveals that Rand knew that she owed more intellectual debts than the one she acknowledged to Aristotle. Rand clearly provided Rothbard with a few leads as to the direction his research might take, and that is what he acknowledges - not, as Barbara Branden [Rand's biographer] would have it, that “it was [Rand] who convinced him of the theory of natural rights which his books uphold.””[1]

His relationship with Ayn Rand became a tense one due to her being a minarchist and he being an anarchist. I suppose you’d guess that would be so since Rand dismissed anarcho-capitalists as ‘right-wing hippies’. Rothbard’s damning essay ‘The Sociology of the Ayn Rand Cult’ was written in 1972, he writes “How such an atmosphere of fear and censorship crippled the productivity of Randian members may be seen by the fact that not one of the top Randians published any books while in the movement (all of [Nathanial] Branden’s books, for example, were published after his expulsion). The only exception that proves the rule was the authorized exercise in uncritical adulation, Who Is Ayn Rand? by Barbara Branden.”[2]Some frankly disturbing things were discovered by Rothbard such as the fact that Nathanial Branden changed his name to ‘Branden’ from Blumenthal – and that it is close to the Hebrew for ‘Son of Rand’.  Also worth reading/watching is Rothbard’s one act play, ‘Mozart Was A Red’ in which an author, Carson Sand, is the head of a near-identical cult to that of the Randroids[3].

Speaking of natural rights theory, Rothbard was not only a hardcore, Misesian Austrian economist, he was also a philosopher. A philosopher who was rigorous, principled, axiomatic-deductive, uncompromising, and radical. A philosophy of liberty, as yet unrivalled in its consistency, was born in 1982 when The Ethics of Liberty was published. This had taken him years and he had been hinting at such a book for a while. The project, as with ‘Man, Economy and State’, had originally been intended to be much simpler and much shorter and yet Rothbard had, by its publication, put the book through several wholesale transformations. The end result is just beautiful.

Starting with a scenario of Robinson Crusoe on his island, as yet undisturbed by Friday, Rothbard presents an axiomatic case for the philosophy of liberty; instead of ‘Crusoe Economics’ he, in ‘Ethics’, gave us ‘Crusoe Philosophy’. Building upon the ancient and ‘glorious’ tradition of the theory of natural law, he transformed the triads of ‘Life, Liberty and Estate’ or ‘Life, Liberty and the Pursuit of Happiness’ into the simplified justification of self-ownership and homesteaded private property. Hans-Hermann Hoppe wrote in his article explaining ‘Rothbardian Ethics’ that “Rothbard has not only reconstructed the ethics of liberty and explained the current morass as the result of statism, he has also shown us the way toward a restoration of morals.”[4]

Not only was he a brilliant economist and philosopher, but he was also a consummate historian, writing a comprehensive account of the course of American history entitled Conceived In Liberty until his death in 1995. A founding member of the highly successful Ludwig Von Mises Institute, Rothbard was academic vice president for 13 years. He and Lew Rockwell were associated outside the Mises Institute Also, with them writing the ‘Rothbard-Rockwell Report’ together and regularly defending ‘paleolibertarianism’ which lead to a period in which they supported Republican politician Pat Buchannan. In defence of paleolibertarianism, Rockwell said:

“Paleolibertarianism holds with Lord Acton that liberty is the highest political end of man, and that all forms of government intervention – economic, cultural, social, international – amount to an attack on prosperity, morals, and bourgeois civilization itself, and thus must be opposed at all levels and without compromise. It is ‘paleo’ because of its genesis in the work of Murray N. Rothbard and his predecessors, including Ludwig von Mises, Albert Jay Nock, Garet Garrett, and the entire interwar Old Right that opposed the New Dealand favored the Old Republic of property rights, freedom of association, and radical political decentralization. Just as important, paleolibertarianism predates the politicization of libertarianism that began in the 1980s, when large institutions moved to Washingtonand began to use the language of liberty as part of a grab bag of ‘policy options.’ Instead of principle, the neo-libertarians give us political alliances; instead of intellectually robust ideas, they give us marketable platitudes.”

Rockwell has since stopped referring to himself as a paleolibertarian due to the term being hijacked by social conservatives or confused with the term ‘paleoconservative’. John Derbyshire of American Conservative website VADRE has named Hans-Hermann Hoppe, founder of the Property and Freedom Society and a dean of the Austrian school of economics, ‘The Last Paleolibertarian’[5]- and with the rampant praise given to HHH by Mr Libertarian I’d say he certainly does justify that title.

One might conclude from this that Rothbard has no legacy, no lasting impact upon the community he once was revered by. Nothing could be further from the truth. When I say ‘The Nonaggression Axiom’, who do you think of? When I say I’m a natural rights libertarian, who will I quote? When you ask an austro-libertarian why the Great Depression happened, whose book, entitled America’s Great Depression, will they refer you to? Rothbard, Rothbard, and a thousand times Rothbard. Because if and when the state is abolished, it will be upon ‘The Ethics of Liberty’ that we will establish our libertarian legal code, and not on ‘Free to Choose’.

This Is Classified Information

How to Think About Magic Tricks and Economics

The Principled Compromise on Abortion