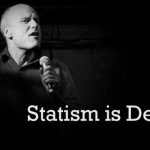 I’d like to try to spark some sort of debate or discussion, whether on the comments below this or on the Facebook page. My question is: UPB or Objectivist ethics?

Both are to be commended; they are both libertarian in their flavour. The former is the brainchild of Stefan Molyneux of freedomainradio and the latter is Ayn Rand’s system of ethics, part of the larger philosophy of Objectivism (with the other categories of Objectivism being Aristotelian epistemology, capitalist politics and romantic aesthetics).

Molyneux’s theory starts off like Hoppe’s; he sets forth what Hoppe calls the ‘a priori of argumentation’, that all propositions in an argument are striving to discern what is true and what is untrue. To deny this would be a performative contradiction as you would be, in denying it, making what you believe to be a statement in accordance with the universally preferred state of mind – truth. To further assert that there is no such thing as truth or falsehood would also be stupid, since you are either convinced of your own statement’s truth or of the falsehood of your opponent’s statement.

What comes next may seem to be a big jump, but I think not. Molyneux states that, just as it is absurd to say ‘there’s no such thing as truth’, there must be such a thing as ‘universally preferable behaviour’. His justification for this is not the best, though. He has stated that because truth is universally preferred, there must be a thing as universally preferable behaviour.  I don’t see how the one follows the other, but I get the feeling that there’s some better reasoning for it and yet I cannot articulate it. Anyway, anyone who’s willing to call themselves an expert on this can put me right later if they wish.

His logic is much better when he actually begins to apply it to specific behaviours. Molyneux doesn’t use the word ‘moral’, but instead the phrase ‘universally preferable’ and so for something to be ‘moral’ - in our language- it must be possible for two people in the same room to want the same behaviour no matter what the consequences. Take murder, for example. There are two people in an apartment and suddenly one of them thinks of a new commandment ‘thou shalt kill!’ and proceeds to take forth a knife and wield it. Well, can murder be universally preferable behaviour? No, because the other man will resist being murdered – otherwise it’s not murder – and thus will be deemed immoral for resisting the ‘moral’ behaviour of murder. As long as the other man resists being murdered, the other man is moral and the man being murdered is immoral. Yet, if the man being murdered were to simply submit then a) it would no longer be murder b) the murderer would no longer be acting morally c) the murderee would die. So, essentially, UPB relies on the concept of ‘universalisability’.

I’d actually say that Molyneuvian ethics are potentially more libertarian, yet less rigorous, than Randian ethics. Rand begins with the premoral choice that man has: to live or not to live. Then, if a man chooses to live, he must live in a certain way if he wants to sustain his life. That which harms his life is objectively immoral and that which helps him prosper is objectively moral. Objectivist ethics are both hedonistic and consequentialist – very different to UPB. Certainly, Rand’s starting point is just as unshakeable as Molyneux’s: man has a choice to live; life is objectively good – if you disagree with this then go and top yourself. The potential problem is, where do you draw the line between enjoying your life and ‘sustaining’ your life? Rand herself was a smoker – the Objectivist line on smoking is that one has a ‘moral obligation’ to smoke – and it was smoking that lead to Rand’s own death. Was she acting on the use of her reason, or was she simply giving in to pleasure?

So, while UPB can tell you ‘don’t kill, don’t steal, don’t lie, don’t rape’, Ayn Rand will simply tell you to ‘sustain your life’. Neither is perfect, but Molyneux is superior to Rand – IMHO. There are, of course, numerous other ethicists and some perhaps are better. Roderick Long springs to mind with his Aristotelian or more generally ‘eudaimonist’ ethics, though many (and myself include) when reading his papers sense their eyes glazing over.

Immigration Is Vital for Our Economy, Don’t Listen to Ukip

Why do we want guns?

Trolling Socialists in Melbourne - “BAN profits and tax the rich 100%”