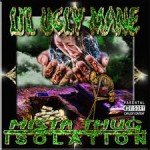 LIL UGLY MANE is the performing name of rap artist Shawn Kemp. Relatively anonymous within a genre usually defined by egotism, his two most recent tapes, the 74 minute Mista Thug Isolation, and the 11 minute EP Uneven Compromise offer some of the most innovative rap of the last year.

Uneven Compromise, although shorter, is arguably the stronger of the two. Clocking in as a single, 11 minute track, the EP serves as a mission statement, combining two disparate ends of UGLY MANE’s style to produce a cohesive piece of music. Shawn Kemp’s production of his work develops atmosphere, and is layered exceptionally thickly for the first half of the song; a screeching melody, backed by discordant bell-tones and a throbbing baseline slowly coalesces before UGLY’s heavily distorted voice chants a monotone refrain. Here, we see UGLY MANE at his darkest, a caricature pushed beyond the standard hood life of rap - UGLY uses anonymity to his advantage, presenting a demonic self portrait: Dante’s Inferno style brag rap. Then comes an abrupt shift in the momentum of the album, into an ethereal bridging section that somehow progresses naturally from the lingering refrain of the first movement.

A minute of cloud beats then segues into the polar opposite of the first movement - the cloudy elements of the bridging section coming to the forefront of a far wispier piece of music pushed along by a snare loop and subdued bass. Here, UGLY MANE’s voice comes through cleaner (although still very deep) as he shows his ability to weave together a story. Somehow, despite the satanic braggadocio of the first section, UGLY MANE is nevertheless able to create a convincing, down to earth picture of his encounter with a heroin addict friend. UGLY’s language flows. Where the first section was murky and atmospheric, the second moves loosely, with every word of the narrative coming at an immaculately controlled pace. UGLY fosters both a legitimate sense of empathy and tragedy in his words, although he climaxes the track bluntly, stretching his narrative’s suspension of disbelief to an extent. Nevertheless, the movement comes across as immaculately calculated, launching from climax into a comedown, before finally fading out - then bursting into white noise before lapsing completely.

Where Uneven Compromise serves as a mission statement, encompassing both the darkest and most contemplative sides of UGLY MANE’s work, Mista Thug Isolation rounds UGLY MANE out. The standout moments of the album come from the moments of subversion, where the archetypes of rap are twisted into UGLY MANE’s artistic vision. Mona Lisa Overdrive, ‘something for the ladies,’ features a 4 bar statement on his preference for contraception following the first hook, whilst Bitch I’m Lugubrious offers the only hook in rap fixed around the speaker being ‘lugubrious.’ Here, he explains himself best when he laconically notes that ‘playa I’m not like you.’ UGLY MANE’s entire character is otherworldly, despite being the standard hypersexual alpha male caricature which dominates rap. Cup Fulla Beetlejuice explains it fully - he’s not merely fearless, but omnipotent, a force of nature without anyone on his level. The character is one which performs well due to quality production. Kemp’s own personal beat creation allows UGLY MANE’s sonic field to be entirely alien. Heavily reminiscent of dark, Memphis style beats, the choice of music range from the weather channel backdrop of Breezem Out, to the murmuring lisp of Lean Got Me Fucked Up. However, the album’s MVP comes in the opening track, Serious Shit, which combines an airy, richly developed beat with a flow that meshes perfectly within it. UGLY tends to weave around beats, but here works perfectly around it, with neither predominant in emphasis. Artistically, the album is cohesive and innovative, and is worth listening to. A juxtaposition of rap norms with something slightly foreign, the end results are two of 2012′s standout releases.

Some Thoughts on the Royals

Immigration Is Vital for Our Economy, Don’t Listen to Ukip