Browse: Home / The GOP Can Become Libertarian: A Historical Lesson

In 1964 US President Lyndon B. Johnson signed the Civil Rights Act. This was a significant milestone. It marked the culmination of the civil rights movement and was a tangible and symbolic victory. It enforced numerous anti-racist laws and was seen to be a powerful statement about the direction of political and social development. It also reinforced what could be achieved by an emotive, but peaceful, mass movement. 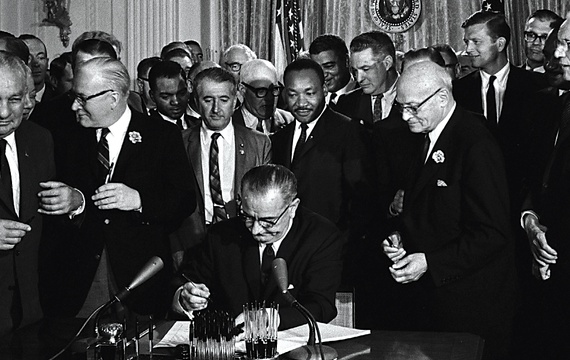 It was also a milestone in another respect. It definitively cemented the Democratic Party’s transition from the party of slavery into the party of anti-racism. Although politicos and US history buffs will be happy to thrill you with the details, the journey of the Democrats’ relationship with race in the 20th Century is not exactly common knowledge.

In the mid 19th Century, the Democrats were very much the party of slavery. Of course, matters were more complex. Nationwide political parties are always coalitions with contrasting factions. And the 19th Century Democrats were made up from some noble ideologies. Jeffersonian and Jacksonian ideals, for instance. However, they also represented the landowners and farmers of the South: slave owners and racists.

The Confederate States were Democrat dominated and Northern Democrats tended to be critics of the Union cause. Lincoln was a Republican. After the Civil War, the Democrats continued to represent the Southern underdog…so long as he was white. The original incarnations of the Ku Klux Klan were actually active within the Democratic Party.

I am not relating this for liberals-are-fascists-Republicans-are-awesome reasons. Rather, I’m trying to make a very optimistic point in two ways. Firstly, political parties can shift dramatically on some extremely fundamental issues whilst retaining their cohesiveness and holding to some overarching principles. Secondly, these changes can be for the best.

A lot has been said about Nixon’s Southern Strategy that sought to realign the political system and attract a new set of voters to the Republican cause. Essentially, he appealed to socially conservative and quasi-racist Southern voters using dog-whistle politics. What is interesting is the other side of this equation.

The Democrat shift did not happen overnight. Given the pretty obvious historical factors, black and other minority voters tended to overwhelmingly vote Republican until the 1930s. Things changed with FDR and the New Deal coalition. The Great Depression gave the Democrats a new raison d’être. Although they toyed with populism in the late 19th Century, had a brief fling with the free-trading Bourbon Democrats in the 1890s, and tried to out-Progressive everyone else during the Progressive era (1910s), they lacked ideological vision and a convincing and cohesive popular appeal until the New Deal.

Regardless of the wisdom and virtue of FDR’s policies, they were marketed as, and to some extent were, benefitting those worst off in society. The combination of social democracy, high-minded liberal rhetoric, and an optimistic and progressive outlook defined the political landscape for a generation. It was this that started to attract minority voters, who tended to be less well off, to the Democratic coalition.

Interestingly, this meant that there was a shift in demography and voting patterns before there was a major policy shift in the relevant area. As noted, many black and minority voters did find that the Democrats better represented (or purported to represent) their interests and feelings. And the explicit racism had become a fringe element in the party, at least at a national level.

However, this was not met with a major shift in racial policy. Indeed, when talk moved to such topics, divisions at the top of the party became much clearer. In 1948, President Truman ordered and end to racial discrimination in the military and the party endorsed civil rights. This prompted Storm Thurmond and the Dixiecrats to run against Truman in 1948 election.

By the early 1960s, it was the Democrats who seemed the natural standard bearers of this liberal cause. It was, however, the official moves against segregation that made the final difference, both for supporters and opponents. This left the door open for Nixon’s schemes, but it also confirmed the Democrats identity and agenda. It also brought them electoral benefits.

Libertarians who vote (obviously, many don’t) and who go for one of the main parties (again, many don’t) usually swing Republican as they figure it is the lesser of two evils. Since Reagan (and his own twiddling of the political spectrum), Republicans appear to be more fiscally conservative than Democrats are socially liberal. Libertarians still jump ship to side with Democrats on social issues, and were happy to punish particularly war mongering big government conservatives, but, on the whole, were very much part of the Reagan coalition.

Since the Obama era, the Republican Party has, rather dramatically, been subject to some pretty vicious in-fighting. In part, this is standard in-opposition behavior. Debates over the relative merits of sticking to the base and branching out are common. And this has been (roughly) represented by battles between the Tea Party and the establishment. Confused policies and a Presidential candidate who pleased no one were the obvious results.

However, the battle runs far deeper than this. There is not just a battle for the Party’s soul. The soul has been ripped to pieces as the Reagan coalition is collapsing. The fact is, the contemporary Republican Party represents some very divergent ideas. Consider the line-up of 2012 Presidential candidates.

You’ll have heard all this before. But what is important is the level and depth of philosophical and ideological differences this exposed. Not to mention the confusion and incoherence. Much has also been said about how these changes and divisions provide an opportunity for a libertarian insurgency. And there’s some truth in that. However, I’m making a slightly different point. We should instead be looking for two things. One, a gradual sea change in the party’s constituency and its message. And, two, some key critical junctures.

Although Reagan’s actual policies left a lot to be desired, his rhetoric did make the libertarian element, that had held some relevance since Goldwater, more prominent. It also ensured that at least some libertarians were invested and involved in the Republican Party pretty much consistently, despite their pretty profound disagreements with it on many key issues.

In a similar vein, observe the predicament of the growing and committed gay Republican groups. Whilst very much Republicans, they have had to sit alongside some outright homophobes and bigots, as well as softer social conservatives. And they have often been treated downright disgracefully.

It’s a point that’s been made a lot, but it needs repeating. Republicans have no choice but to appeal to minorities, women, gay and trans people, and immigrants, as well as young socially liberal types. This does not necessarily mean that full-throttle libertarianism is on the cards. Anarcho-capitalists are as unlikely to take control of the Republicans as Malcolm X was likely to become a Democratic Presidential candidate. But a more moderate shift is as viable, and would be as positive, as the Democrats’ progress on race and segregation was.

The sea change is happening, though. Although we like to massively exaggerate with our grandiose talk of a “libertarian moment,”  a more modest shift could still favour libertarianism-within-republicanism. In an interesting reversal of the “New Deal phenomenon”, I suspect that a not insignificant number of people are Democrats as a matter of identity rather than as a matter of their actual beliefs.

Many Hispanics would identify with a soft-traditionalism conservatism, and like the values of free enterprise and responsibility. Many individual women, gay people, and members of ethnic minorities are economically successful. It’s not a huge stretch of the imagination to think they could find a low tax agenda appealing if it came in a package that didn’t also include bigotry.

Leaving aside these speculations, I think it is clear that many people would never consider voting Republican simply because they look like a nasty party who do not seem to speak for a large section of the population. This does not mean that they would necessarily reject any Republican-ish platform. A xenophobic, misogynistic, and homophobic image unsurprisingly limits your appeal.

This would not mean giving up the heart of Republicanism. The overarching principles that even the contemporary party trumpets - The American Dream, individualism, small government, traditionalism - would hardly be undermined by immigration reform, accepting gay marriage, or ending the war on drugs. In fact, such positions may be more in line with real conservatism.

Again, consider the evolution of the Democrats. Roughly, they have always played the role of the populist party. All they did by jettisoning the racists was to expand the notion of what populism meant. They didn’t change their principles, their policies became more consistent with them. The same could be done by the contemporary Republican Party.

As for critical junctures, there are some key debates that are already defining political discourse and which could be seized upon for a “civil rights moment”. Gay marriage. Immigration reform. Ending the war on drugs. Some decisive break with the Bush Doctrine. A shift on abortion. Some symbolic move to demonstrate a less hostile and exclusionary promotion of Christian values. Perhaps a Presidential candidate who stood for all of these.

As a libertarian, I would obviously welcome such a development. I also think the Republican Party will find that they have to move in this direction. But, most importantly, I predict that this could simply happen organically.

There are reasons to optimistic.