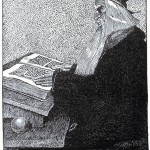 My mother? Not so much.

“What do you want one for? What’s the point?” she always asks. I finally have an answer for her.

I vividly remember the first time I saw magic, not a card trick or sleight of hand, I mean real magic. I was attending an advanced computer network operations programming class and our instructor brought in his “hobby” to show us.

Perhaps I should set the scene a bit more. Our instructor was a brilliant (but nerdy) individual whom we had affectionately given the nickname “Gandalf the balding” because he had hair down to his waist and was prematurely balding. His equally brilliant (and nerdy) girlfriend was a neuro-researcher at a nearby university, who loved that he was balding because “she didn’t have to shave his head to attach sensors or leads”.

So you can imagine my trepidation when he pulled out a bicycle helmet with a web-work of wires all connecting into a ribbon cable that he then plugged into the computer connected to the projector. He then proceeds to perform magic. You see he’d written a mouse driver that converted the brain impulses that the sensors connect to the helmet were detecting into movement on the mouse.

When someone looks at a computer monitor, screws up their face in concentration, and then the mouse moves… well, that’s what magic should be like.

This was actually predicted by the author Arthur C. Clarke, his third law states, “Any sufficiently advanced technology is indistinguishable from magic.”

If true, Todd Coleman at the university of California, San Diego, is a wizard of the highest order, and has made parlor tricks of the bike-helmet and its tangle of wires. In his own words,

“Capabilities for non-invasive measurement of neural signals are important because they support many critical biomedical applications, including brain-machine interface paradigms in mobile applications. Currently, recording neural signals in mobile environments is a challenge because conventional measurement devices have rigid or mildly flexible construction and bulky cables for signal conduction. Technologies of the future must address these drawbacks, through new ideas that provide ultrathin, conformal designs, with high fidelity and non-invasive measurement modes. Our research group, in conjunction with the research group of John Rogers at UIUC, is developing foldable, stretchable electrode arrays that can non-invasively measure neural signals (i.e. EEG) without the need for gel. The electrodes rely on layouts recently developed for silicon electronics that offer linear elastic responses to applied force, with the capacity to fold, twist and deform into various curved shapes. Stretchable electronics have the key advantage that they can wrap arbitrary, curvilinear surfaces and, at the same time, achieve mechanical properties that approach those of tissues of the human body (e.g. skin). These capabilities are especially significant for applications in skin-mounted devices for electroencephalography (EEG) in mobile environments.”

In my words, “they print you a temporary tattoo that can read your mind and translate specific electrical impulses into electronic instructions!”

Placing sensors on the inside of the wrist to sense signals sent to the hands, micro-gestures could then interface with your environment, controlling elevators, cellphones, tablets, advertisements, Tv’s, or even light-switches.

Sensors on the throat can detect subvocalizations, making silent phone calls a possibility, improving speech-recognition possibly even returning the ability to speak to those who have undergone tracheotomy or similar surgery.

With technology like this, no longer at the tips of your fingers, but at the base of your neck, hollow of your throat or inside of your wrist, perhaps even my mother would change her opinion about tattoos.