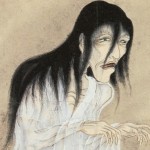 I was watching another couple episodes of “My Ghost Story: Caught on Camera”, last night.

This is the only show of that type that I do enjoy, for whatever reason. The others, “Ghost Encounters”, “Ghost Adventures”, “Paranormal State”, etc., all seem too forced and exaggerated, too overly-earnest, to be taken seriously. I don’t know why I bother.

I guess it’s just the “reality show” aspect. I actually hate “reality” TV, but like all train wrecks, it’s hard to look away; also, it’s fun to be a little creeped-out, once in a while.

While some of it is kind of neat, other stuff is just goofy. For example:

“As we got out of the car, I took this picture of the (house, hotel, theater, hospital, ancient lunatic asylum etc.) with my digital camera (they always have to say what kind of camera it is), and there were what looked like faces in the window, that were looking out at us!”

The key phrase here, of course, is “looked like”.

One “face” in a show last evening, an incredulous, bleached-blonde female investigator said, “looked like it had snakes for hair(!)” and it truly did; I guess Medusa came out of Greek Mythology to hang around a decrepit, closed hospital in Indiana. No one was turned to stone, though, I noticed. Lucky.

Another face in the window “looked like SATAN”! (REE!-REE!-REE!)

So, the hateful, angry Deceiver of the World and eternal, sworn Enemy of God, the Loving Creator of Everything, has apparently taken time off from tempting the souls of the faithful in an effort to lure them into Hell, to lurk in the crumbling hallways of an abandoned hospital.

Well, yes; I’ll admit, they did kind of resemble creepy, indistinct faces in the window, looking out.

But it’s amazing, what we can see when we want to see it. Come on, lady; be at least a little logical. I mean, you’re outside, and it’s broad freaking daylight.

Those are reflections in the glass, not faces.

They only looked like faces, because firstly, the human brain is wired to pick out facial features, and you wanted them to look like faces; and secondly, they’re even highlighted for the show, in post-production, to look like faces, so the viewer can plainly see them as…”faces”.

Just like they do with the fuzzy, staticky, mostly unintelligible “Electronic Voice Phenomenon(s)”, recorded on digital voice recorders. Rarely are these readily understandable.

They play it, and have a convenient subtitle of what it’s supposedly saying.

Oh, okay; yeah! I totally hear it, now that I can read it, too! No connection at all, there. Try listening with your eyes closed, sometime; don’t read the subtitles. You’ll hear little more than unintelligible static.

I’m so sure they didn’t sit around for a few minutes after recording, playing it back, over and over, coming to a consensus on whether or not that random burst of static was yelling at them to “GET OUT!” because “there was something there, that definitely didn’t want us around!” (a commonly-reached conclusion on these shows).

One they played on another episode I saw a while back-so they said-recorded the “ghost” saying “GET OUT NOW!” It sounded to me like it was saying “I want a hot dog”. Seriously.

Whenever they play the “shouting” ghost recordings, I picture a frustrated, pissed-off ghost, fists clenched, arms stiff, screaming its ethereal lungs out, and the hunters just standing there, looking around.

Do we forget how to talk, after we get to the other side, or do we trade the ability to speak clearly for the ability to walk through walls? One of the places featured on that show was the Twin Cities Opera House in McConnellsville, Ohio. That’s only about an hour or so from here.

I’ve been there, to see a Christmas country music stage show. There are supposedly fourteen separate ghosts in the place, including an “evil black shape” in the spooky sub-basement that “drains people of their energy”.

Evil? Well, come on now; cut it some slack. Upset, maybe. After all, I’d be mad, too, if I was trapped in the basement for decades.

I’m always amused by things like actual news stories, where an “official” building, say, an old police station, a 200-year-old court house, whatever, is experiencing a “haunting”, so they call in a team of “paranormal investigators” (often consisting of chubby, nerdy-or-Gothy-looking post-adolescents from some local college or university, or chubby, nerdy-looking middle-aged adults with nothing better to do), to…well, investigate.

Frequently, the conclusion is foregone; I mean, of course they’re going to find evidence of a haunting. It’s what they do. They want to find a haunting, so they do.

Then they leave, and the ghost stays. What did the people who called them in expect?

They’re not Ghost Orkin; they’re not the “Ghostbusters”, trapping and holding spiritual entities in a containment device in the basement. What can they do about it?

Now, I will say this….”Paranormal State” often employs the services of a (chubby, nerdy-looking) Catholic priest, who is called in, after “confirmation” of the haunting, to banish-or release-the spirit. They also employ the use of psychics, for what that’s worth. This approach often brings some conclusion to the events.

Many times, the investigators will use their recorders to ask the “entity” what or who it is, and the answer comes back, to a corny burst of spooky music, “demon”.

Now, I personally believe this to be contrived nonsense.

Demons are hateful; they’re malicious, sadistic and violent, as anyone who has ever taken part in a demonic exorcism can tell you (and I personally know someone who has).They’re also powerful, and they don’t like us, because we are, at least supposedly, made in God’s image. Of course, as former angels, and as angels are supposed to be humanlike in appearance, so are they.

This, perhaps, makes them the ultimate self-loathers.

At any rate, an encounter like that, with an actual demonic entity, I believe, would not end well for the average hapless, chubby, nerdy-looking-and spiritually-unprepared, much less spiritually-protected- ghost hunters. The guys on “Paranormal State” do seem to call their priest right away, if the entity they encounter says it’s a demon. This at least makes sense. You don’t screw with stuff like that, you know? You just…don’t.

I believe very strongly in something beyond this life, and I’ve had some odd experiences over the years, but never anything direct or definite, that I can say “yeah, that’s a ghost”.

I, as I believe these investigators very often do, simply choose to believe they were ghost encounters. Therefore, I can’t help being skeptical about these cheezy, exploitative shows.

Now, there is stuff that—if it can be believed to be truthfully and accurately presented, obviously—is hard to explain; shadows-recorded in heavily-pixelated video images, with night-vision-equipped cameras-that move in deserted hallways; floating “orbs” (another phenomenon about which I’m skeptical, though I have taken a lot of pictures that had them in); unexplained mists; objects which move on their own.

I do believe in the Other Side, though. That’s why I don’t mess with “contact” stuff like séances, and Ouija boards (with one of which, a close childhood friend of mine had an unsettling experience; she was shaken enough to convince me to this day, that they’re not to be trifled with).

You don’t know what you might be messing with, over there, and that’s my point; it might indeed be sweet old great-aunt Phyllis, who just wants to say ‘hi’ from the ether; or, it might be Jeffery Dahmer. Or, for all we know, it might be Pazuzu, the demon from “The Exorcist”. You’re spinning the barrel on a loaded revolver; you’re deliberately poking the bear. Why invite such trouble?

Maybe I’m wrong, but ghost activity can’t be as common as these kinds of shows are making it seem.

If so, what real future do we have, then, after we pass on? Do our souls-or whatever-just hang around after death, languishing, trapped in some kind of limbo, and pining for life? I certainly hope not.

Despite what we may choose believe, and what our faith of choice tells us, none of us knows, with absolute certainty, what happens after we die. We just think we know, based on our religious instruction or personal ideals. For those of us who believe, the Bible tells us everything we need to know. However, perhaps there are some things we just don’t need to know, this side of the grave.

Maybe after I die, I’ll find out why ghosts have clothes. That one has bugged me for years.