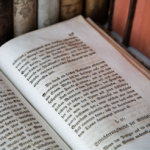 Stephen Greenblatt writes in The Swerve; How the World Became Modern, “Authors made nothing from the sale of their books; their profits derived from the wealthy patron to whom the work was dedicated. (The arrangement … seems odd to us but it had an impressive stability, remaining in place until the invention of copyright in the eighteenth century.) Publishers had to contend, as we have seen, with the widespread copying [by hand] of books among friends, but the business of producing and marketing books must have been a profitable one; there were bookshops not only in Rome but also in Brindisi, Carthage… and other cities [in the Roman empire].”

This suggests to me that books and other writings today would be produced without copyright, which is after all a government granted monopoly and an enormous tax on the public. Think about it.

One thought on “Would books be published without copyright?”