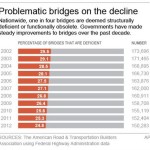 An Interstate bridge in Washington State collapsed without warning on Thursday May 23rd, a bridge that carried over 71,000 vehicles a day on average. The collapse is now being blamed on an over filled truck that “bumped” the steel framework above the road, subsequently causing its collapse. Taxpayers are now on the hook for 15 million dollars to repair the bridge and will not be able to use the bridge “possibly for months”. Luckily no one was seriously injured as their vehicles plunged into the water below. [Video Here] 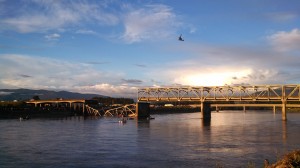 The Federal Highway Administration is responsible for federal funds used for constructing and maintaining the National Highway System. The Transportation Department gave the bridge a satisfactory rating for 47 out of 100 in a 2012 inspection, both of which are government agencies. Children in school are given a failing grade when getting 47% of the answers correct, but it is apparently a passing grade and safe enough for 71,000 passengers a day. The American Society of Civil Engineers, a private organization with more than 140,000 members of the civil engineering profession worldwide, gave the bridge a C- rating in their 2013 report. The group went on to say that a quarter of Washington’s bridges are structurally deficient or functionally obsolete.

This incident is eerily familiar to an I-35 bridge collapse that occurred in Minneapolis in 2007, killing 13 people, injuring 145 more and put taxpayers back nearly 9 million dollars. It is no secret that the interstate system in America is a crumbling, degraded mess. While many lawmakers are pointing the finger at reduced infrastructure spending and calling for more government intervention, many believe that government intervention is the root of the problem. 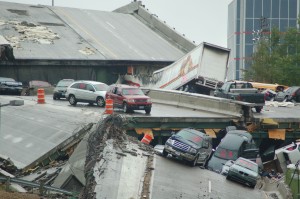 This inevitably leads to the Statist shotgun question that is meant to stump every small government advocate: “But who will build the roads?” The real question that should be asked is: “Who can build a road that will not spontaneously collapse into the water?” The answer is the Free Market and to privatize the roads. The massive oversight, bureaucracy and complacency of national safety organizations are a perfect example of how big and centralized power is deficient and fails at the most basic functions of government.

But alas, this incident, like many before it, will be spun to justify more government expenditures and more taxes to “make sure this never happens again.” In a Free Market situation, if a private company allowed their bridge to degrade to a point to where it would collapse by a mere bump, they would be immediately put out of business forever. Taxpayers have little to no recourse against lazy government bureaucrats that will continue on to retire with a healthy pension.

If it is roads, justice, police or national defense, the federal government continues to prove time and time again that a large centralized bureaucracy is a huge failure. It is time to reign back government, not only from overreaching subjects such as healthcare and gay marriage, but from the most basic and essential aspects of human existence.