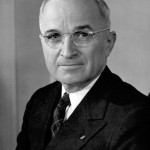 John M. Barry, the eloquent independent scholar who wrote “The Great Influenza” about the deadly 1918-1919 pandemic, coined the felicitous phrase “fashions of interpretation” in his latest book “Roger Williams and the Creation of the American Soul.” It’s perfectly appropriate for how we consider past presidents. If Warren Harding was not what virtually all his detractors wrote (see John Dean’s “Warren G. Harding” for another view) and the forthcoming “Why Coolidge Matters: America’s Most Underrated President” by Charles C. Johnson (Encounter Books), then why not another evaluation of Harry Truman, who’s been scrutinized by Robert Dallek, Robert Ferrell, Alonzo Hamby, Michael Gardner, Zachary Karabell, David McCullough, Robert J. Moskin, and Gil Troy among others. Does his stewardship need still another reassessment?

It apparently does, according to Aida D. Donald, author of a sympathetic biography of Theodore Roosevelt and former editor-in-chief of Harvard University Press. In her latest book, “Citizen Soldier,” she reassesses Harry Truman from his earliest years to his military service in WWI, his years as a U.S. Senator investigating wartime profiteering, and his accidental presidency. Much that she tells us is familiar territory though there is some new material.

Donald tracks his role in WWI and how this peaceful, spectacled, unimpressive man fell in love with military life because of the comradeship and respect he earned as an officer. Shocked by what he experienced during the war it nevertheless became “the petri dish for his later political leadership,” she writes. And while the war would destroy a generation of European men”–and kill more than 100,000 Americans — “it would make a man of Truman.” Indeed, he was one of the very few presidents who actually saw combat (Washington, Jackson, Grant, McKinley and Theodore Roosevelt, who loved all wars until his son was killed in WWI; Eisenhower, incidentally, was never in combat).

We know about the time Truman spent with the crooked Pendergast Kansas City machine but Donald offers new information about his life as an “honest man in a den of thieves.” The new material is drawn from Truman’s Pickwick Papers, named after the hotel he regularly fled to escape the stress and personal doubts about his connection to the bandits running the wide-open city. The experience “plagued [him] with serious psychosomatic disorders,” which cursed him most of his life. At the hotel, far from the public eye, he wrote extensive notes to himself, only recently made available by the Truman Library.

Thrust by chance into the White House, his term was marked by successes and failures, the latter including how he handled the 1952 steel strike when he foolishly threatened to draft strikers –many of them military veterans- and nationalized the mills, which the Supreme Court wisely ruled unconstitutional.

But there were also shining moments. Never especially concerned with civil rights for black Americans, perhaps as Donald suggests because of his family’s southern background, he grew infuriated when racist southerners began attacking black veterans. “My God! I had no idea that it was as terrible as that! We’ve got to do something,” he said. In 1948 he desegregated the military (one year after the Brooklyn Dodger president Branch Rickey had broken baseball’s unwritten racial bar by signing the incomparable Jackie Robinson). He also resisted George Marshall and the State Department and recognized Israel. His admirers claim he halted the march of communism in Europe, promoted the Marshall Plan, which helped revive postwar western Europe, while the Korean War protected South Korea and Japan from the communists.

Truman despised the demagogue Joe McCarthy and his emulators and supporters, and tried hard not to give in to them, but he foolishly expanded his Loyalty Program, damaging far too many innocent people. He also had to cope with the powerful China Lobby eager to “unleash “ Chiang Kai-shek’s army in Taiwan and invade mainland China, which had gone communist in 1949. All the same and most significantly, his decisions to bomb Hiroshima and Nagasaki and enter the Korean War are the touchstones by which his presidency must ultimately be judged.

Truman first learned about the bomb after becoming president since FDR would have little do with him and instead turned the project over to Henry L. Stimson, his Secretary of War, for whom Donald has little regard. She asks if Truman’s order that it be used only against military targets was ever followed and whether he ever understood the devastating post-bombing consequences. Truman knew nothing about radiation sickness, she says.

Revisionist arguments that the bombs should not have been dropped because the Japanese were on the verge of surrender are dismissed by Donald as “untenable,” having been rejected by most historians. (Sadly, the book has no footnotes). She dismisses efforts to paint the bombing as an effort to intimidate the Soviets and then asks, “Should not the saving of perhaps hundreds of thousands of American soldiers’ lives be put on history’s scales”? But did it in fact save so many American lives? There is simply no definitive evidence that an invasion of Japan would have caused so many American casualties. It was an exaggeration but served then and now as a rationalization for an unprecedented act of war.

Few American historians specializing in that era can read Japanese but historian Tsuyoshi Hasegawa can. Working from American, Japanese and Russian archives, his book “Racing the Enemy: Stalin, Truman and the Surrender of Japan” argued it wasn’t the atomic bombs that ended the war but Japanese fear of the Soviets — who in 1939 had badly beaten the Japanese in a major battle in the desolate wasteland between Mongolia and Manchuria (see Alvin D. Coox’s “Battle of Nomonhan: Japan Against Russia, 1939”). This, Hasegawa argued, led to Tokyo’s deep apprehension in 1945 that the Soviets might also move on Hokkaido, the northernmost Japanese island. The Japanese, he declared, had indeed asked Moscow to mediate a truce ending the war. To Hasegawa that meant the atomic bombings were unnecessary.

Whatever the truth, neither Hiroshima nor Nagasaki were important military bases as Truman claimed. But Americans in and out of uniform were weary of the war and alarmed by prospects of many more military casualties and they celebrated the raids. But not all. Fleet Admiral William D. Leahy, FDR and Truman’s chief of staff, did not. Horrified at the bombing, he refused to join the cheering. In his forgotten 1950 memoir “I Was There,” (Truman wrote the foreword), Leahy wrote “The Japanese were already defeated and ready to surrender,” adding, “My own feeling was that in being the first to use it, we had adopted an ethical standard common to the barbarians of the Dark Ages. I was not taught to make war in that fashion, and wars cannot be won by destroying women and children.” Ominously, he warned “There is a practical certainty that potential enemies will have it in the future and that atomic bombs will sometime be used against us.” Leahy was not alone as Eisenhower also opposed the bombings because he too believed Japan had already lost the war.

And then there was Korea. Just five years after the end of WWII the U.S. was again at war. A few days after North Korean troops crossed the border into South Korea in late June 1950, Truman committed air and naval forces and soon after dispatched ground forces. He avoided consulting the Joint Chiefs of Staff who were unanimously against sending in ground forces. Nor did he ask for congressional approval, a lesson absorbed by future presidents bent on military intervention.

As the war proceeded, Truman was assured by the CIA and all intelligence agencies that the Chinese would never become involved, which of course proved inaccurate when MacArthur, disregarding orders, approached the Yalu River separating Korea from China. Truman was not blameless, however, since he could have ended the war when the North’s armies were broken after the successful Inchon landing. Truman chose instead to “go for broke,” Donald writes. MacArthur then split his armies, cutting them cut off from one another and once some 300,000 Chinese troops entered the war, the U.S. army and marines had to flee southward, “one of the great retreats of history.” Before too long, Truman fired the imperious MacArthur for insubordination and by doing so re-emphasized civilian control of the military and perhaps prevented the rise of some future man-on-horseback. Even so, the firing was opposed by millions of Americans who considered the General a hero who had dared challenge a president they despised.

Donald writes, “MacArthur’s response to the Chinese invasion was the utter destruction of everything between the war front and the Yalu.” What strikes her is that, according to an “official history” (again, the source is unknown due to the absence of footnotes):
“… we killed civilians, friendly civilians, and bombed their homes; fired whole villages with the occupants—women and children and ten times as many hidden communist soldiers—under showers of napalm, and the pilots came back to their ships stinking of vomit twisted up from their vitals by the shock of what they had to do.”

By war’s end 36,576 American troops were killed, not to mention the UN forces including Britons, Koreans north and south, and Chinese who died. “This had become a great war,” she concludes. It had indeed. A little more than ten years later the U.S., its political leaders and assorted ideologues addicted to wars they and their children never seem to fight, was at war again in Southeast Asia.

Donald’s conclusions are worth repeating: “The Korean War transformed the U.S. into a very different country. It soon had hundreds of permanent military bases abroad, a large standing army, and a permanent national security state at home. We can add to that a huge nuclear force, a penchant for invading foreign countries on little, or no, evidence of danger to the U.S., and a government not always protective of civil liberties.”

Decades after he left office with dismal poll ratings, Truman is now fondly remembered. In her nuanced and readable book, Donald, despite her criticisms, thinks Harry Truman “comes out not as a Mount Rushmore great president but rather a triumphant near-great president. And in the pantheon of presidents since Washington, this is a tribute few others have achieved.” Informed readers – believers and skeptics - will have to decide for themselves.