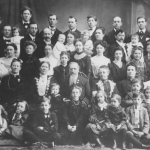 David Cameron seems intent on pushing through the legalisation of homosexual marriage, according to some reports to the bewilderment of his own mother and certainly much to the discomfort of some of his backbench Conservative MPs.

In the House of Commons back in December Dr. Matthew Offord, Tory MP for Hendon, asked if the government was going to introduce other forms of marriage, such as polygamy? Such a question was no doubt intended to ridicule the concept of gay marriage. Shock horror! Polygamy? Unthinkable. But in all seriousness, what objection to polygamy can possibly stand up to logical scrutiny or indeed legal challenge if gay marriage is legalised?

The decriminalisation of homosexual acts per se in 1967 followed by the introduction of civil partnerships and soon possibly gay marriage have over time completely demolished the Judeo-Christian morality which have for a thousand years or more formed the basis of English and most other European codes of law. That being the case, there can surely now be no legitimate objections to the legalisation of heterosexual polygamy, certainly not from a Libertarian perspective.

The basic point is that marriage in whatever form consenting adults care to implement it is a personal matter between those concerned, and the state has no business saying whether it is legitimate or not.

In some countries, the state does not conduct marriages but simply issues certificates recognising for bureaucratic purposes marriages that people have already entered into.

It is not a case of a registrar or cleric authorising a marriage as we often see on television “by the power vested in me by the state of… I now pronounce you husband in wife.” Rather the couple inform officials of the state that they are now married and the state merely issues some paperwork to confirm the marriage, thus making life easier for the couple in future dealings with bureaucracy.

Indeed, this was actually how things were done in Britain until the mid 18th century - well, for monogamous, heterosexual marriages anyway! -  until the state assumed for itself a more intrusive and prescriptive role with Lord Hardwicke’s Marriage Act of 1753 in England.

In Scotland traditionally all that was required for a couple to be recognised as married was that they make a declaration before two witnesses, although most couples wished to have a public ceremony of sorts. Up until 1940 wedding ceremonies could be conducted by any responsible adult. In the famous Scottish border village of Gretna Green - first stop for couples eloping from England - this was not a registrar or church minister but usually a local blacksmith, an “anvil priest”.

State recognition of various forms of marriage as opposed to conducting or insisting upon official state or church-sanctioned marriages applied to Muslim and other religious marriages including polygamous marriages was an accepted principle of colonial laws in many parts of the former British empire for example, the Marriage and Divorce of Mohammedans (sic) Act 1906 in Uganda.

If Britain was once happy to accommodate the desires and traditions concerning marriage of diverse communities throughout the Empire of old, why not simply enact similar laws domestically today given that many of those communities are now significantly represented among the population of the United Kingdom itself?

One size does not have to fit all. One law does not have to govern all with regard to marriage. For example in colonial Gambia persons entering into marriage had the three different British laws to choose from depending on their circumstances and beliefs. Operating side by side were the Christian Marriage Act 1862, the Civil Marriage Act 1938, and for the 95% Muslim majority population the Mohammedan (sic) Marriage and Divorce Ordinance 1941.

The precedents have been set from imperial times. Surely other than prejudice, and particularly if gay marriage is legalised, there can be no reasons to delay or prevent the legal recognition of other forms of marriage which adult citizens may wish to enter into of their own free will. Polygamy certainly. Also other concepts of marriage which could prove very useful in our own society such as “mutah” or fixed-term temporary marriage which forms part of Shia Islam and is not uncommon in Iran. Under the cohabitation which is so common in the UK today, unmarried fathers have few legal rights to their own children and the children are not recognised as legitimate heirs. Both these problems are handily taken care of under mutah.

Similarly with the neo-pagan re-discovery of the ancient tradition of hand-fasting marriages where vows taken may be for “a year and a day,” “a lifetime”, “for all of eternity” or “for as long as love shall last.” The prevalence of divorce in modern society makes a mockery of “till death us do part” marriage vows. Should not people be free to enter into a more realistic option of their choosing?

Indeed, I understand that the concept of fixed-term marriage has been given serious consideration in Mexico.

I contend that when it comes to private domestic arrangements such as marriage, it is time for the state to take a back seat and stop telling people what they legally may or may not do. Instead the state should put in place administrative frameworks to give legal and administrative recognition to whatever arrangements that consenting adults choose to enter in to.

2 thoughts on “If Gay Marriage, Then Why Not Polygamy?”