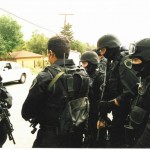 Military soldiers peered around corners and into cars with automatic rifles drawn. Door to door inspection of homes commenced.  Armored vehicles with gun turrets spun around anxiously on a hair trigger. Posse Comitatus was suspended, the military policing the streets, as crowds of armed men clad in black and camouflaged uniforms walked suburban neighborhoods. A state of lock down, “shelter-in-place” and martial law was declared in Boston and the suburb of Watertown, Massachusetts on Friday. If someone had been ignorant of the outside world for the past week, looking out the window must have been a terrifying scene reminiscent of an invasion of a foreign military. But alas, this massive show of force was all for one man, suspected of perpetrating the Boston Marathon Bombings. 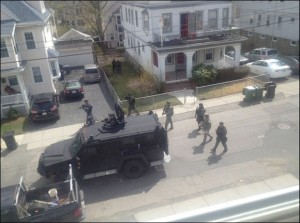 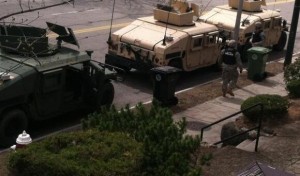 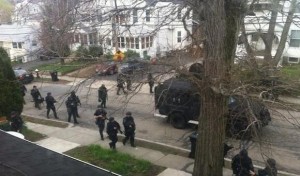 Dzhokhar Tsarnaev was eventually found hiding inside a boat and was “smoked and gassed out”, with chilling resemblance to the Dorner case. He was taken into custody in critical condition. Tamerlan Tsarnaev, brother and suspected accomplice of Dzhokhar, was gunned down the previous day in an apparent shootout with police. According to the power vested in the FBI by a Justice Departments memo’s “safety exception”, Dzhokhar Tsarnaev’s Miranda rights will not be read to him before questioning, if he ever wakes up again.

What was the reaction to the conclusion of this sad string of events? Citizens all across the North East took to the streets in celebration, hailing the brave work of the police and military and celebrating the death of one suspect and the capture of the other. This entire situation was a disgusting display of events on both sides. The Tsarnaev brothers allegedly committed a heinous and cowardly act of terror, killing three people and injuring many more. What was just as troubling is the roll out of the true face of America’s Police State. Few are decrying the suspension of the Constitution under the NDAA and Patriot Act. No one in the cheering crowds care they were under a state of de facto military control. No one cares that an America citizen has no Bill of Rights protection tonight, regardless of his alleged crime. No one cares that gang bangers in poor urban areas of America frequently have shoot outs and bloody bodies lay in the streets. Where are the hordes of black and camouflaged uniforms to bring law and order to those areas? Or does no one care about the dark skinned people?

I used to think that most Americans were against the NDAA and Patriot Act. I thought that the politicians that voted for the suspension of the Constitution were still in office because voting is a scam. I was wrong. Politicians are there because they represent exactly what the people want, a big daddy government to take care of them. Can I really blame the people of Massachusetts? It is one of the strictest gun control states in the US. I speculate that many homes in the Boston area had no way of defending themselves if Dzhokhar Tsarnaev did try to harm them. Ultimately, they voted, and therefor, asked to be disarmed.

The amount of liberty Americans are willing to sacrifice for the State to provide “protection” is astounding. I am not condoning the alleged acts of the Tsarnaev brothers nor am I criticizing the police and military for stopping the supposed ongoing criminal acts of accused and dangerous individuals. What I am baffled at is that the people of Boston are not only tolerating such a reaction, but they are cheering it on. This is a very slippery and gradual slope that Libertarians have recognized for a long time. I see a brewing discontent, disconnection and dissent among many areas of the American public if this continues to be the new norm. The Tsarnaev brothers have not be convicted of anything, but are already suffering punishment. I fear we will see huge fallout after the incidents of Dorner, Aurora, Newtown and now the Boston Bombings. I do not know what is coming next from the State, and that scares me more than any bomber or shooter could.