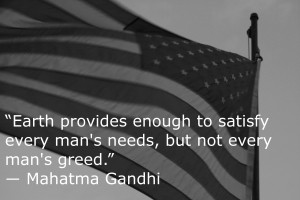 GREED: excessive or rapacious desire, especially for wealth or possessions.

America, it seems, has grown from the culture of American pie and baseball to the culture of consumption of items for less; without the thought of the actual cost!  Once upon a time, American culture stood for values, morals and good ethics with accountability.  True culture in America is of the people that make up America!  Yet, so very easily, people are persuaded into another realm; with the ideology of “it’s good to have greed” without even knowing its being greedy!

An ever loving American slave; to the bigger, better, more state of mind!  Brought to us by our friends Mr. and Mrs. Corporation, via express propaganda marketing schemes!  Bombarding the minds of Americans on a regular basis!  Altering mental states, to that of the marketable slothful human being!  Whose life, has been traded for a mountain of debt and ultimately in the end an ever growing mountain of waste in the toss it away society!   A prime example of the culture of greed comes during the hApPy TiMe of XMas shopping. Most know this as the black Friday extravaganza.  When people get shot, stomped, fought, stabbed and trampled for what again?  So little Tommy can have that desired  toy that was blasted in a purposeful marketing scheme across the Tele on the weekly Saturday morning cartoon event! The reaction “Mommy and Daddy I need!”

Welcome to the culture of GREED, where items take precedence over human life!

You ever heard the statement, “The American Dream”. Just knock the dust off the brain and ponder the thought!    Pretty little white picket fences, titles and endowments, trophy wives and husbands placed on the mantel, the picture perfect existence!  One might call this “A marketable ideology to maximize profits!”  It’s the picture in the magazine add, the commercial on the Tele!  Contorted images to instill emotions, give a feeling of all will be bliss with this magical marketable item. Consequentially did anyone ever sit and think on all of this?  To what availing end does this madness stop?  A field once flat; now, just a mountain of trash!  Commercialized brainwashing as our youngsters are taught to listen, not to think, to obey, never to question, not to think nor reason, Just do; do what is expected for the benefit of the corporation and their hierarchies pocket!  Go to school, get good grades, join the military, get a free ride through college or die to protect the money making machine, get a degree, get a career, get married, get the cars, the house, the kids, materialistic items to fill the house full.  China direct anyone?  Then, on one uncertain day, does one get awoken in a panic of sweat in their make believe maple hard wood China made MDF bed, only to sit in fear and wonder…..“How the hell did I get to this point?”  Asking the question:  “Did I slave myself for things that never really made me happy?”   Then, as one is taking the time to gain the answer to that question; one can ponder on another question. “Where exactly is my happiness? Did it grow wings and fly away?”  Now, one has to think; avoiding the ultimate truth, that, one sold their soul for an item!  The billboard of conscience flashes “You traded happiness for slavery to all the items you thought you needed to own!  Item’s, that truly now own you!”  Does one think while driving in their fifty thousand dollar SUV the hard question?   “Did I just fool my life away on the Culture of Greed for a dream that never really was my own?” The thought races as eyes look hard upon the billboard sign that states!

“Welcome to America, the land that sold its soul.”

“Experience demands that man is the only animal which devours his own kind, for I can apply no milder term to the general prey of the rich on the poor. “

The creators of the culture of greed

Corporation’s ideology of maximizing profits in an American culture!

We hear about corporations, the evil machines, the protocols and policies that the members of these deities called Corporations hide behind, even though; they created it in the name of the corporation to obtain maximum wealth for self.

The culture of ethics and accountability, killed off, by the new culture! The mandated culture of Greed!

So how does one see this culture? Answer is simple. It’s everywhere; just turn those pretty little heads so that eyes may see the flashy signs that are all around us in a marketing scheme.  When one turns on the Tele to see one’s favorite show, suddenly; it’s an bombarded with new things to purchase, from some fancy electronic item, to the latest and greatest facial crème to make one look amazingly young again; to that long line of clothing items that is so desperately needed.  On the way to work, one sees the hundreds of billboards of something to purchase.  One goes to the dentist and waits for their name to be called, in sheer boredom, picks up a magazine and there it is. Things to purchase!  In a fury of thoughtless behaviors; we get lost in the magic of the purchase.

As one is at the market or at the local box stores or fancy retailer, does one ever ask the simple question?  What is the cost to having all of these things?  These ITEMS!   For one to have a pair of jeans, with some name on it, that gives one some an imaginary status!  Yet, did one think!  Who made these items?  A human being that made a pair of jeans at a price tag so low that the Corporation makes mega profits!  Laborers who make less in a year than most Americans make in a month or two.

What did it cost to those laborers whose natural resources were used to make these items?  Now, with all these thoughts, how about this one!  If the Labor is barely above slavery then who is profiting the most from this ideology of maximizing profits without the thought of the social and environmental cost?  If a laborer in China is making less in a year than an American makes in a month or two who gets the money because the cost of a pair of jeans is still fifty dollars or more?  THE CORPORATION hierarchy gets the complimentary heart healthy bonuses for selling out Americans!  The welcome mat says this is just business but the real message says Welcome to the culture of GREED!

“Wars and revolutions and battles are due simply and solely to the body and its desires. All wars are undertaken for the acquisition of wealth; and the reason why we have to acquire wealth is the body, because we are slaves in its service. “

This culture of greed actually robs, pillages and plunders to obtain this so called “STUFF”!  These MARKETABLE ITEMS that everyone has to have, without the thought of the real cost! Make products cheaper and in turn, lose jobs in the US. Here is the notion; send everyone to school, that will solve the problem!  A siren goes off and the lights FLASH!  Here is the daily bonus question!!!   What happens when everyone has the same degree and there are no jobs in those fields?  Hit your buzzer.  That’s correct GO BACK TO SCHOOL AGAIN! Let’s all contribute to the mountain of debt!   We all love a good mountain of debt.   So, with unemployment, people living off the government because they can’t get a job that pays enough to live where does that leave this nation then?  It leaves us with this!  The created culture of Greed has cost the American society this and what each house hold now owes:

“For greed, all nature is too little. “

Did you see that a $135,713.00 per household to get ourselves out of the mess we the Government got us into!  Think about this, the next time you think about voting for these parties of R & D who sold out to the corporate mandate of greed long ago, think about this for the sake of your children and their children.  Think about this as the lust in thy eyes just sees the bigger, better, more picture with a lower cost item that you got for a really great buy. When the cheap cost today is weighed against the cost of the future; see those awesome savings coming back home!  Then in the end, the cost will not only be on us as a whole but as stated; on our children and their children’s children whom shall bear the load of our irresponsibility due to the ever growing culture of greed!

The Future of Money

“If a person has joy in what he does

There will be harmony in the work

If there is harmony in the work

There will be order in the nation

If there is order in the nation

There will be peace in the world.”