When 1,200 Britons were infected in a measles outbreak last November, leaving nearly 100 people hospitalised and killing one, health officials were clear on the cause: vaccination rates have fallen, and diseases which had once been close to eradication are returning.

“This is the legacy of the Wakefield scare,” said Dr. David Elliman, spokesman for the Royal College of Pediatrics and Child Health, speaking to the Associated Press.

After Andrew Wakefield published his now-debunked study linking the measles, mumps, and rubella (MMR) vaccine to autism in children in 1998, vaccination rates in Britain entered a steep decline, and the annual number of new measles cases skyrocketed.  Immunisation rates in the UK fell from over 92% before the publication of Wakefield’s now-discredited paper to as low as 73%.  In London, vaccination rates dropped to below 50%.

This drop in vaccinations ten years ago is now beginning to take its toll, as thousands of unprotected children mingle in the nation’s public schools.  At present, a measles outbreak in Swansea looks set to match the extent of the one last November, with the number of total infections nearly tripling in the last two weeks.

“There is a potential for more outbreaks. Children are going to get measles. There are about two million children who are susceptible because they haven’t been vaccinated. London is a particular case of point.”

Britain’s urban centres are at significantly higher risk of epidemics and outbreaks, given the massive ‘reservoirs’ of unprotected populations living in UK cities.  In fact, approximately 80% of children in London have no protection against the disease, and even small outbreaks could quickly balloon into major epidemics if decisive action is not taken.  According to Dr Jorg Hoffman, a Public Health Wales consultant in communicable disease control, measles is an incredibly contagious viral disease, and should not be underestimated.

“In a school setting, one child with measles sitting in a classroom for just one hour will lead to at least 70% of other pupils who are not vaccinated catching measles.”

Despite this, the followers of disgraced doctor Andrew Wakefield continue to advance their conspiracy theories, believing that big corporations and greedy capitalists in the pharmaceutical industry are out to get them.  If these epidemics are to be stopped, parents will have to listen to sound scientific advice and make rational decisions, without buying into media hype and long-debunked studies by cranks trying to sell books.

However, for J. B. Handley, of the anti-vaccine group ‘Generation Rescue’, no amount of reason will change his mind, and this should worry everyone.

“To our community, Andrew Wakefield is Nelson Mandela and Jesus Christ rolled up into one.” 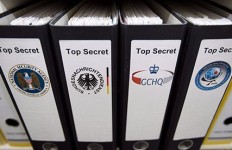 European spy agencies collaborate to spy on everyone→