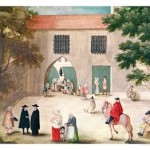 In spite of that “brand new” regression model brewing in the hallways of Cornell or the eternally touted New Jersey experiment, min wage laws are not helping the poor! There is no new data that proves economic tradition incorrect; there are only additional tiny fractions of data whirling in a sea of formulae. Statisticians (code for economists before graduate school) may simply elect or exclude whatever data they wish – be it too hard or too expensive to measure – in order to reach their proper margin of error. Yet, if these data-pushers could truly sift through a world of six billion intricately networked individuals, they would find their answer sitting on the lap of a college freshman in econ 101 – price supports cause scarcity!

A malicious printing, credit granting, monster lives amongst us. Not only is this monster responsible for the relative decline of our purchasing power it is partnered-in-scheme to redistribute wealth from the vast toward the selective. Behind their secrecy and double speak linger the inflationary henchman of a banking confederacy, the Fed. Using various monetary concoctions, the Federal Reserve has the capacity, and resilience, to redistribute wealth by means of inflation. Yet, unlike Robin Hood, this form of redistribution is absent of a feel-good mechanism often accompanying taxation. There is no wealth transferred from “greedy rich” to the “innocent poor”; in fact, much like Friedman’s negative income tax, the distribution is inverse. Wealth is thus transferred, via inflation, from the vast bulk of the populace to the selective few of the rich – the connected? How you may ask? When money is inflated its purchasing power declines, yet, the decline is not instant, there is a lag. Therefore, those of initial receiving are liberated from the eventual decline of purchasing power, whereas, those on the final stages of receiving are left with idle wealth and inflated prices. These individuals on the lower ends of the totem pole are the wounded.

Indulge me for a second as I parallel subsidizing to American Idol. We all love watching the first two weeks of singing rejects get their feelings hurt by Simon, we wonder, how can they not know? Well, like a world of ever-smiling mothers (and Paula Abduls), no one wanted to break their hearts or singing dreams. No one wanted to tell these screeching soloists that they were not quality singers, and so, their inflated self-image became a byproduct of polite-subsidization. Now, once in competition, these inferior singers quickly realize their lack of talent, courtesy of those who stand to lose from such inflated promises. Very few would disagree with this example, yet, carry this analogy to other markets of employment and you will find more ridiculous polite-subsidization. Only, the culprits won’t be smiling mothers or Paula Abdul’s, it will be inferior employees begging for more charity, or inferior employers squawking for a helping hand.

According to Ron Paul “We could eliminate the income tax, replace it with nothing, and still fund the same level of big government we had in the late 1990s.” Yet, an even deeper question involves defining a public sector? Aside from the various assembles of inefficient services offered to the public, in reality, a swollen public sector is by definition a sunken private sector, for, the public sector is but a parasite feeding upon its citizens’ labor. How can one define wasting resources to collect resources in order to redistribute resources a proper path toward prosperity?

Alas, in spite of all these welfare cures we now know about, individuals of little welfare will likely burrow at the troughs of our leadership so as to continue in squander.

This article was origionally published on http://www.lewrockwell.com/