To begin, I’d like to share just how much debt the United States of America owes. At the time of writing, the national debt hovers around 16,964,550,000,000.Right below seventeen trillion dollars. With this amount of money, one could link hundred dollar bills end to end and make a connection from the earth to the sun seven times. Now that a few seconds have passed, individual debt owed to the government is around 53,532 dollars. Every person in the U.S. would have to pay fifty three thousand dollars each.

After yesterday’s debt ceiling “fiasco”, economic debate has been nonstop. While there are those that argue that we should pay off our debts, there are still a large number of Americans that believe that a default is in order. No matter whom you believe, there is one fact that still remains; we will never pay off our debt. The only logical course of action, it would seem, would be to cut frivolous spending wherever it is to be found. Why then didn’t the government work on massive spending cuts over the shutdown? One very simply word is all that is needed to answer that question. This word is slavery. By forcing the populace into unimaginable debt is to bind them financially. By offering them no alternative in means of currency, governance or political parties; you bind them politically. Finally, by encouraging immoral government practices, by supporting immorality on television and by allowing the lazy and immoral to live off of the state; you bind the populace morally. What remains is that word that I mentioned earlier; slavery.

What is slavery? What is the definition? Where and how has it been applied in the past? The definition of slavery is;  “the state or condition of being a slave; a civil relationship whereby one person has absolute power over another and controls his life, liberty, and fortune”. Only in the U.S. it is not one man wielding this power, but nearly six hundred men and women owning these slaves. Slavery is the subjugation of one or many to another. Some examples of slavery would be that of the Jews by the Babylonians in ancient times. Another equally apt case is the Native American populace subjected to the Spanish conquistadors. Throughout history, man has held a remarkable record of attempting, and often succeeding, in forcing other men to serve him.

How is the subject of slavery relevant to our modern world? Surely the United States has outlawed it. Indeed the reverend Jeremiah Wright would spontaneously combust if slavery was practiced in our advanced and civil society. Yet slavery is very much alive, though not in the terms that most would recognize. This is a slavery of a kind that has managed to remain very much cloaked throughout history. Through divine right to intellectual superiority, governments have made excuses as to why they should control your very lives. From eternity and indeed to eternity, intelligent life will always seek to rule each other. Yet how can we call ourselves “intelligent” or even “civil” if we cannot find the good will to let others do as they please. To live life for themselves and let those that wish to fail, fail.

If you can take away any one thing from this montage of thought, I hope that it would be that government will never have the answer to everything. We, the people, the individuals that make this nation’s clock tick, are the answer. It is people like you and I that have been and always will be the answer. Life can get very uncomfortable, completely miserable and immensely beautiful. The joy in life comes from experiencing the bad and therefore having the ability to recognize the good. How can we do that if we content ourselves to let a small group of vile and greedy people run our lives? Defaulting on our debt, cutting spending, upping production and working hard might very well be uncomfortable, but it will be infinitely more rewarding. 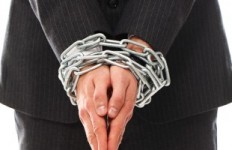 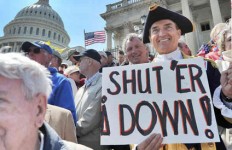 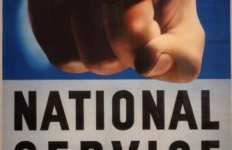