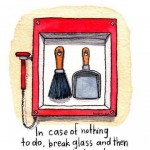 In a previous post I discussed how the fiscal multiplier is less than one, in a nutshell this means that ‘Stimulus’ spending does not help the economy, at best it saves pain up for later and pays it out, quite literally, with interest in time.

But it is not this crushing destruction of tax and spend economics, nor the morality of piling up debt in the present for our children and children’s children to pay for in the future that I want to look at here, I wanted to discuss ‘Trickle Down Theory’

What’s the difference? Some may say that Government spending means money goes into a different area, but by the whole idea of a multiplier the money should multiply round the system regardless. The whole reason it doesn’t work is because the multiplier is indeed less than one.

However, these two things are in fact the same, it is just a different initial entity spending the money, any Keynesian who believes in High Government spending should be thanking very rich individuals who partake it their own high spending, as it is ‘Stimulus Spending’ on a slightly smaller scale.

Indeed in my view rich Individual spending is preferable as it doesn’t wrack up high debts like Government spending does, it is a choice unlike Government Spending and in doesn’t impose damaging debt upon future Generations, the point however is that Keynesians should be welcoming and encouraging the Richest people into their society.

Of course I don’t believe in tax and spend, as I have said numerous times, it doesn’t work and has proved to be false, I therefore do not need to and don’t worship the Ultra-Rich, for the Keynesian however, every time he criticises the rich for being wealthy or complains (as I have seen some Guardian Columnists do) about the Rich list coming out, and the fact people are wealthy, he is being massively hypocritical. Not only do the rich fund the Government Spending, with the top 1% of earners paying 25% of income tax receipts. But they also provide constant stimulus spending, the kind Keynesians demand. The ultra rich are the champions of Keynesians and any Keynesian has a duty to thank, not criticize or demonise them.

This article was origionally posted by Olly on http://thebackbencher.co.uk/