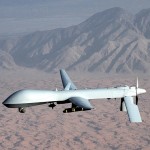 This is part one of a two-part article on drones and their implications on a free society.

Anyone who reads the news is well aware of President Obama’s policy of drone warfare. Privacy advocates are up in arms that local jurisdictions, federal agencies and even news organizations are buying drones up like hotcakes. Robotic death from above, or the eye of big brother in the sky, but is there a lighter side to drones?

Well if you’re Chris Anderson, Editor of Wired magazine and unofficial king of all nerddom, drones should be fun and educational. In pursuit of this goal he has started two companies. One, called DIYDrones (www.diydrones.com) is an opensource community for people interested in building drones. The other company is called 3D-Robotics, and they produce hardware which interfaces with common Radio Control, planes, cars, quadcopters, helicopters, blimps… well you get the idea.

I attended a 2012 DEFCON presentation given by the man himself and he discussed his industry shaping business model of demi-open-source development and manufacturing. He summarizes it like this; “we give away the bits and sell the atoms.”
f
It works like this, the 3D Robotics team produces hardware to interface with RC devices, they then publish an standard library for programming the device. At that point the DIYDrones community takes over and produces software which provides “mission” parameters for the drones. These “missions”are then downloaded into the drones, which are GPS aware, and the drones follow the parameters as laid out by the mission planner software.

Drone software is extremely flexible, it allows traditional point-to-point “missions”, multiple waypoint missions, and something fascinating called a “flight box” or area of operation “mission”. Most of these “missions” are fairly self explanatory, it is the latter type to which I’d direct your attention.

Flying RC planes, or helicopters is both difficult and riddled with peril, namely that it’s flying and the pilot is inexperienced. Using a computer and GPS defined “flight-box” the drone can be commanded to stay within a defined space, and if it leaves the box, control of the drone is ceded to the computer which will then safely return the drone to the box. This allows a beginner pilot to take fly their drone with impunity, and when it does something dangerous, the drone takes control to prevent a crash.

Some of the newer models have cameras onboard and can be directed to “follow and lock” on a target. This means that the drone will follow a person, usually by tracking a signal from a transmitter or a cellphone, and keep the drone’s camera trained on the individual. The uses for this are many-fold, filming a athlete participating in a sporting event, snowboarder, surfer or even a mountain climber. This allows the owner to obtain footage that would have been previously unavailable or prohibitively expensive.

Taking the open-source model a step further, the specs, design files, and even Computer Aided Drafting resources are all available. 3D-robotics doesn’t even try to keep their technology propietary. The DIYDrones community is welcome to propose changes, modifications and even make the changes themselves. If 3D-robotics likes the changes they incentivize the person, or persons, who modified the design. If an individual submit enough successful modifications 3D-robotics will ultimately vest the individual in the company.

This business model has allowed them to keep their costs extremely low, yet they remain singularly agile when it comes to the evolving desires and needs of their customer base. Specifically because their customer base is actively involved in shaping the capabilities of their hardware. If one were interested in the growing drone community they could mosey themselves on over to www.DIYdrones.com to see what the community is up to these days.