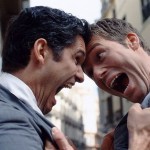 Is “Minarchist” a dirty word? For many hardcore Libertarians/Anarchists it is!

If you identify yourself as wanting to reinstate the Republic, “That government is best which governs least” or a Constitutionalist, you are labeled a Minarchist. While I think that most small government advocates embrace this classification, especially when they are immersed in what Libertarianism really means. However, I also think there is a growing trend of Libertarian Elitism as the movement gains popularity.

This Elitism is clearly present in criticisms of public figures that identify themselves as Libertarian, but are rejected by many hardcore Libertarians. Figures such as Julie “Token Libertarian Girl” Borowski and Glenn Beck have come under harsh attacks for not being Libertarian enough. While having evolved to full Voluntaryist recently, I obviously disagree with some of their philosophical ideas. On the other hand, having just been in their shoes a short while ago, I can firmly say on their behalf: “Give me a break!”

If you are a Libertarian and are acting in an Elitist fashion, you are going against some of the principles you criticize these individuals for not fully embracing. The Libertarian Movement should be about acceptance and unity under Liberty and Freedom, not rejection and snobbishness. Someone you would label and ostracize as a Minarchist could very well be ignorant to “how deep the rabbit hole goes”.

Even if someone knows full well all the aspects of Libertarian Anarchy and still chooses to identify themselves as Minarchists doesn’t mean we tell them to take a hike! It is fine to disagree with them about the degree to which government should be reduced, up to and including completely eliminated. It is not ok to make them feel unwanted in a movement they so desperately want to be a part of.

If you are an Anarchist, consider this. Will it be easier to reach a Stateless Society by:

1. Partnering with Minarchists and reducing the government to a near non-existent point and then go from there?

2. Rejecting everyone who does not think exactly the way we do and keep preaching to a deaf society that feeds on big government forever and ever?
To be clear, I am NOT advocating for the Libertarian Movement to be hijacked and corrupted like the Tea Party Movement was. I am also NOT advocating for either Minarchists or Anarchists to give up their stance. What I am advocating for is Minarchists and Anarchists have so much in common that it is ridiculous, illogical, irresponsible and counterproductive for us to be dividing and fighting already.

Can’t We All Just Get Along?

Let’s pull back the American Empire, together. We will NEVER change anything if we are fighting with each other.