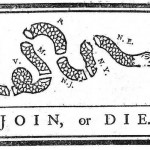 In my first essay at The Libertarian, I promised to establish, over the course of several essays, a now conception of both libertarianism and the struggle between the libertarians and our opponents.  I must confess now, though, that the conception I plan to offer is not entirely new.  In fact, I will argue that what divides the statist from the libertarian is that the two are on opposite sides of the largest divides in all of philosophy.  We must realize that libertarianism, even non-anarchist libertarianism, is not simply a flavor or variation among policy options.  A picture many of us, libertarian or not, carry, of philosophy containing, as a subset, political theory, and political theory containing points labeled, variously, “fascist” “conservative” “libertarian” etc. is utterly mistaken.  Rather, one should, if one insists on the use of Venn diagrams, picture a larger circle into which conservative, liberal, and the rest will fall (each being a small circle, not a point), and a second larger circle, having no overlap with the first, into which a small circle for libertarianism may be placed.

Many of us imagine that philosophy began with Socrates.  This is an amusingly narrow-minded worldview, one which can only be the product of the academic imagination.  Minds, in the process of existing, cannot help but philosophize – there can no be more be a time when human beings did not philosophize than there can be one when they did not breathe.  The birth of philosophy is lost in our ancient evolutionary pathways, not the scribblings of a particularly ugly homosexual with dictatorial tendencies.

From the dawn of time, man has been confronted with the existential choice that I choose to locate at the center of all philosophical musings – to seek greatness via a vision of a better life, or to seek safety via fearfully clinging to the advantages of the present.

To demonstrate the existence of this choice of worldviews prior to the birth of formal philosophy, I will illustrate it by pointing to two pre-Socratics.  The two men I will describe in this essay will be the central characters in the grand human drama I will present.  Their forms will reappear in every generation – the struggle between Rothbard and Marx, between Hayek and Keynes, between Mises and Schlitz – is nothing less than Parmenides and Heraclitus reborn to fight another day.  This is not to claim that Parmenides is a libertarian, or Heraclitus a statist – rather, that the worldviews they staked our include these types as subcategories.

The question confronting the pre-Socratics was simple.  The world can be readily observed to be chaotic and ever-changing.  As Heraclitus argued, to step twice into the same river is impossible – the water having flowed on and the river become a new river.  Speaking literally, there is nothing but flux.  To investigate the river more deeply, imagine being a super-scientist of sorts – the ideal ever scientist dreams of is to investigate all problems at deepest, simplest level.  Two rivers, then, are identical only if their atoms are identical.  Having once stepped into the river, the atoms most certainly have changed – hence, a new river.  There is no certainty, no absolute, and no true knowledge, only a bewildering and frightening world of change.  Such a worldview is naturally a fearful one – out of the fact of utter, overwhelming, kaleidoscopic change comes powerlessness, a bitter clinging to islands of stability, and the futile wish for a higher power to ensure our safety and survival.  Ladies and gentlemen – the birth of the nanny state!

The reader will note, of course, that while critical of this view, I started out just above by admitting its obvious truth.  What, then, is the alternative – to deny what is obviously true?  The answer, Parmenides responded, is not to deny what is obvious, but to point out that what is less obvious – less physical, less provable – is true as well.  The physical world is in chaos, but it does not follow that stability, order, and unity are illusions.  What follows is only that, if stability, order, and unity are to be found, they must not be found in the physical world.  Later philosophers spelled out the details in various forms centering around the idea of Idealism.  What is fundamental is that one must look to a created world – to an image to be formed only in the mind, not found in the world – to offer a deep, abiding unity around which the chaos of our world flows.  Stability will be found in this ideal world of thought.  The stability is imaginary, to be sure – and yet what is imaginary is more true than that which is only apparent.

So it was that Pamenides, despite all the evidence to the contrary, claimed that all is one.  So it was that his pupil Zeno argued that, if we insist that appearances are real and true to reason right through them, we derive absurd consequences, such as the impossibility of movement.  We can apply reason only to reasonable things, says Zeno – reason is the backbone, not the flesh.  It is this idealism which can play host to libertarianism.  The libertarian cannot live in a world absent reliable consequences of motion, the libertarian cannot live in a world without rules, a world formed purely the evidence of senses.  To the reality behind the appearance we assign the term metaphysics – libertarianism requires a metaphysical backing in a way that statism does not.  Metaphysical thinking is the refusal to accept that the evidence of the senses is all there is.  The metaphysical thinker can imagine a greater world than what is, while our disciples of Heraclitus are locked into the concretes of what exists.  Only with metaphysics is it possible to lead the life of vision – to release one’s grip on tenuous stability in order to take a leap into what can be.

To sketch out where we will travel together in the future – we will need to examine the creation of the calculus by two men, two representatives of two worldviews – Newton and Leibniz.  We will look at the Austrian school of economics, its philosophical underpinnings, and the struggle between Menger and the German Historical School.  We will look at the Vienna Circle’s denial of metaphysics and the impossible situation such an Austria faced in answering Hitler – we will look at Godel’s response to Vienna, and at Godel’s larger program which, unsurprisingly, included libertarian sentiments on the law and the Constitution.  From Godel we will derive a theory of law and its unsuitability to ensuring the good life.  Finally, we will trace American history, finding shades of Heraclitus in Reconstruction and in the Progressive Era – and shades of Parmenides in the Populist movement.  We will examine the founding and the Constitution for the influences of both.  We will conclude by seeing what this picture of libertarianism offers us by way of strategic considerations.