Mao Zedong was a revolutionist and a leader of China between 1949 and his death in 1976. Also the greatest mass murderer in the history of mankind responsible for death of up to 70 million people.

1. A revolution is not a dinner party, or writing an essay, or painting a picture, or doing embroidery. It cannot be so refined, so leisurely and gentle, so temperate, kind, courteous, restrained and magnanimous.

2. A revolution is an insurrection, an act of violence by which one class overthrows another.

3. [Classical] Liberalism is extremely harmful in a revolutionary collective. It is a corrosive which eats away unity, undermines cohesion, causes apathy and creates dissension. It robs the revolutionary ranks of compact organization and strict discipline, prevents policies from being carried through and alienates the Party organizations from the masses which the Party leads. It is an extremely bad tendency.

4. Stalin is our greatest father and teacher.

5. People who try to commit suicide — don’t attempt to save them! . . . China is such a populous nation, it is not as if we cannot do without a few people.

6. To read too many books is harmful.

8. The Communist party must control the guns.

9. [Our purpose is] to ensure that literature and art fit well into the whole revolutionary machine as a component part, that they operate as powerful weapons.

10. The guerrilla must move amongst the people as a fish swims in the sea. 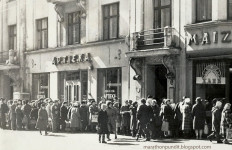 Things you could not buy in the Soviet Union→