Remember those teenagers who pretend to like something because every one else likes it in order to “fit in” and seem cool? Contrarians are doing the same thing except they flip their position in order to appear outstanding.

Most people have that one contrarian friend who needs to be on the minority side of every issue for the sake of arguing. The person who needs to differentiate themselves from popular opinion in order to seem intelligent and well-spoken. In other words, the contrarian is the hipster within political culture.

Do not misunderstand, it really does not bother me that people like this exist, but given the popularity and increase in this kind of behaviour, they kind of deserve to be made fun of a little.

Family Guy satirized the contrarian in the episode “Excellence in Broadcasting.” See video below for the joke.

The Libertarian does not own the above-mentioned video and is only sharing it for entertainment purposes. All rights and ownership go to Fox and the writers of Family Guy.

Nazzy S. is an editor for The Libertarian and writer for The Midnight Zone. Twitter @NazzyTheGreat

The Federal Reserve and Stock Fall→ 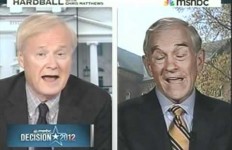 Can You Trust Think-Tanks?→