Lysander Spooner (1808 – 1887) was an American individualist anarchist, committed abolitionist, political philosopher, entrepreneur, and legal theorist. He is famous for starting his own post company which was forced out of business by the US government. His most famous written work is No Treason: The Constitution of No Authority, which argues against the infallibility of the US constitution, in part because it permitted the existence of slavery.

“Now a slave is not ‘held’ by any legal contract, obligation, duty, or authority, which the laws will enforce. He is ‘held’ only by brute force. One person beats another until the latter will obey him, work for him, if he require it, or do nothing if he require it.”

“A man is no less a slave because he is allowed to choose a new master once in a term of years.”

“If any man’s money can be taken by a so-called government, without his own personal consent, all his other rights are taken with it; for with his money the government can, and will, hire soldiers to stand over him, compel him to submit to its arbitrary will, and kill him if he resists.”

“There can be no criminal intent in resisting injustice.”

“The right and the physical power of the people to resist injustice, are really the only securities that any people ever can have for their liberties. Practically no government knows any limit to its power but the endurance of the people.”

“A married woman has the same natural right to acquire and hold property, and to make all contracts that she is mentally competent to make reasonably, as has a married man, or any other man.”

“A man who is without capital, and who, by prohibitions upon banking, is practically forbidden to hire any, is in a condition elevated but one degree above that of a chattel slave. He may live; but he can live only as the servant of others; compelled to perform such labor, and to perform it at such prices, as they may see fit to dictate.”

Lysander Spooner wrote many books and shorter works. They are available for free at the Online Library of Liberty. 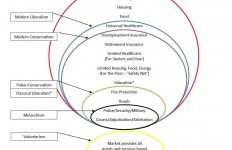 Ideologies on the axis of liberty→