Henry Louis “H. L.” Mencken (1880-1956) was a 20th century American journalist, author, satirist, and social critic.  Mencken was one of the most prominent American libertarians of the early 20th century. The son of German immigrants and early apprentice to his father’s cigar company, Mencken set out to become a professional journalist despite lacking connections or higher education. Ever the iconoclast, Mencken is known for both publishing the first English language book about the philosophy of Friedrich Nietzsche, as well as serving as the primary correspondent to the 1925 Scopes “Monkey Trial”.  Mencken represents the ‘Tory Anarchist’ strain of American libertarianism; a worldview that combined Anglo-American classical liberalism, aristocratic social sensibilities, and a brutal commitment to honest assessment of their contemporary culture.  END_OF_DOCUMENT_TOKEN_TO_BE_REPLACED

Karl Hess (1923-1994) was an American political philosopher, libertarian activist, journalist, survivalist, professional welder, and speechwriter for both the Republican and Libertarian parties.  Abandoned by his Pilipino colonialist father, he was raised by his strongly Catholic and classical liberal mother in a manner reminiscent to today’s unschooling movement. Hess dropped out of formal schooling at the age of 15 in order to become a professional journalist.  Hess wrote the 1960 GOP platform and served as the primary speechwriter during Senator Barry Goldwater’s 1964 presidential bid.  Following the purge of many prominent Goldwaterites from GOP leadership after the 1964 defeat, Hess became a libertarian anarchist under the influence of Murray Rothbard.

END_OF_DOCUMENT_TOKEN_TO_BE_REPLACED I was a neocon. The year was 1999 and the race was on between Al Gore and George W. Bush for president. Actually we had gone through the dot com bubble and I suffered the pangs of loss in my meager portfolio. Global Warming was off the radar. I was reacquainting myself with politics after spending a few years examining the court system from the inside while enjoying a particularly nasty four year divorce.

By the end of the next year we found ourselves embroiled in the battle for the office of president. As a Neocon I was rooting for Bush and hanging on to every word the news saw fit to broadcast. Fast forward another year and I watched in horror as the second plane struck the World Trade Center south tower, the north already being hit.

Like many I cheered the Patriot Act, thinking we had to have a way to hunt down the terrorists. After all, I had nothing to hide. My lovely fiancée called it the Gestapo Act, being of a more liberal leaning, or maybe given the history of her parents in a German work camp during WWII she just understood tyranny better than I did. I would argue the need for a crack in basic privacy to keep us safe. I hadn’t read history, finding it boring trying to memorize dates and places, and never being introduced to the stories themselves.

My eyes started to open when statutes passed that forced me to buy bulbs that leak mercury vapors. How could that great defender of freedom, George W. Bush sign such a thing? Had I been wrong about him? Had I bought into the theater being played out in my government? I had, past tense. It was time to really see what was going on. It was time to get involved.

I joined the local 9-12 group, spurred on by Glenn Beck and a burning desire to learn the history I never knew. I joined a local Tea Party to feed on other’s opinions, only to watch as the group worked to elect another lying politician. I held my nose and voted for “Maverick” McCain, not because I thought he was any better than Obama, but because there was a 24/7 Obama channel on the dish and I wondered where the money came from to fund that. I took the Foundations of Liberty course through Monticello College , forcing me to read amazing stories of Thomas Jefferson, Ben Franklin and George Washington. I read about the Roman Empire, Communism in China and Hungry, the Fascism of Mussolini and the National Socialism of Hitler. I read the Declaration of Independence, the Constitution and the Federalist Papers. My eyes were opening.

The scales fell from my eyes when a friend gave me an excerpt from “The Creature from Jekyll Island” and I spent the next three days researching central banks and the history of the Rothschild family. I felt like Neo in the Matrix having swallowed the red pill. There was no going back; this Neo-Con was waking.

As I proceeded on this journey I realized the solution to this problem of dictatorial government and fiat money lay in the People. The People needed to be taught, not to pass some test, but to think for themselves. Using the greatest tool of enlightenment available, the internet, I studied the Frankfurt School of thought and the damage it has done. I learned the true meaning of a classical liberal. I devoured the works of people like Ron Paul, Lew Rockwell and other prominent Libertarians.

This rabbit hole goes deep and I implore everyone to take the red pill and follow it. Learn to be better People that we might have better government; of the People, by the People and for the People. 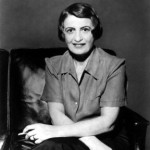 I have been – with some qualifications – a fan of the late Ayn Rand and her writings since I first came across her as an undergraduate student in the UK back in the late 1980s. I have read pretty much everything she wrote, even the more obscure of her non-fiction pieces, and have followed some of the scholarship and activism associated with her name. (I have also read two biographies of her and am well aware of the controversies about her life although I am also aware that some of the facts about her life and behaviour are fiercely contested by some. Just as there are Rand worshipers, there are, equally, Rand-phobes. I sometimes find the latter more repellent than the former.) END_OF_DOCUMENT_TOKEN_TO_BE_REPLACED