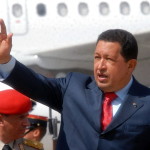 By EMMA BELFORT
The Libertarian Staff

Health issues prevented Venezuelan re-elected President Hugo Chavez, from attending an inauguration ceremony on January 10th, but throngs of supporters and militants from his party, Venezuelan United Socialist Party (PSUV) swore an oath of loyalty in his absence.

Speaking from behind a podium that proclaimed “We are all Chavez”, a member of his previous cabinet, Nicolas Maduro — a former bus driver, called on those gathered to take an oath of “absolute loyalty to the leadership of ´Comandante´ Hugo Chavez”.

“I swear by the Bolivarian constitution that I will defend the presidency of ´Comandante´ Chavez in the street by reason, by truth and by the strength and intelligence of a people who have been liberated from the yoke of the bourgeoisie”, Maduro said.[1]

The crowd repeated his words, holding thousands of tiny copies of the constitution up in the air.

Several Latin American leaders and close allies of Venezuela pumped up the crowd with speeches praising the president and his political ideology.

“The health of brother Chavez is a problem and worries not just Venezuelan, but all anti-imperialist, anti-capitalist people”, Bolivian President Evo Morales said.

Uruguayan President Jose Mujica offered more somber words of encouragement: “There is a man who is battling for his life, and he is in your hearts”, he said.

Daniel Ortega, the President of Nicaragua, was saucier, describing Chavez political opponents as “ ´vultures´ hoping for the Venezuelan president’s death and aiming to destabilize the country”.

Maduro didn’t provide specifics about Chavez health condition but said he was still “in battle”. “From here we say; ‘Comandante’, don’t worry: continue your battle. There is a Bolivarian government here and the revolutionary people are supporting you”, he said.

Chavez, 58, is undergoing cancer treatment in Cuba and has not made a public appearance since December 11, 2012 when doctors operated on him. Meanwhile, Venezuela finds itself caught in a bizarre and unprecedented situation: having a De facto government.[2] Many specialists doubt the legality of the current cabinet, since its mandate expired on the date the new presidential term was due to commence (January 10th). The highest court in the land has sanctioned the “continuity” thesis which purports that the convalescing elected official can continue governing despite not being able be sworn-in for his new term in office. On the other hand, scholars reject the highest court’s position, claiming that it amounts to a breach of the constitutional thread, rendering all acts of the current “administration” null and void.[3] Many in Venezuela now believe that their country is being governed by Raul Castro and his cronies from Cuba. The 2013-19 term would be Chavez fourth, having won re-election in October 2012. This feat was made possible by a 2009 constitutional amendment-allowing him to run for office consecutively and indefinitely-passed in the National Assembly, which is conveniently controlled by the executive.

For many, Chavez brought hope to the vulnerable social classes while many others believe he is just an irreverent demagogue and populist leader. But what has this president done for his country and its people to deserve three consecutive re-elections? Lets briefly review his legacy; what are some of his accomplishments, after 14 years in power? According to the 2013 Index for Economic Freedom, published by the Heritage Foundation, Venezuela’s economy ranked as the 174th freest, out of 177 countries.[4] Its score has decreased from last year, reflecting deterioration in business and labor freedom, as well as freedom from corruption, all of it accompanied by an explosive increase in government spending.

Venezuela ranked 28th out of 29 countries in the South and Central America/Caribbean region, with its overall score recording one of largest declines in the 2013 Index. Venezuela has Latin America’s highest inflation rate (currently nearly 30 percent); chronic electricity, food, and housing shortages; and its crime rates are the second highest in the world. The judiciary is dysfunctional and completely controlled by the executive. Politically inconvenient contracts are abrogated, and the legal system discriminates against (or in favor of) investors from certain foreign countries. The government expropriates land and other private holdings from corporate and individual investors alike, arbitrarily and without compensation. Corruption, exacerbated by cronyism and nepotism, is rampant at all levels of government.

How can Venezuela find itself in this deplorable situation? Hugo Chavez arrived at the political arena on February 4th, 1992 during a failed coup d’etat against the then president, Carlos Andres Perez (CAP). Chavez coup attempt came after a riot known as the Caracazo: a series of protests and looting revolts, which took place in 1989. The Caracazo was, according to pundits, a spontaneous response to the announcement of unpopular but necessary economic measures by the government. Some analysts, however, contend that the riots were hardly spontaneous but planned and executed by CAP’s political rivals, including some of Chavez would-be supporters, to destabilize the government and depose CAP of his post. Chavez has claimed that his coup attempt was a “response” to the manner in which the protest was suffocated by the government. Pure posturing and demagoguery, argue some.

After his failed coup, Chavez was incarcerated but would eventually not be tried; for several intricate reasons but most crucially because his confinement was cut short by the then president, Rafael Caldera.

By 1998, Hugo Chavez had won the presidency, vanquishing the traditional party system, and launching his Bolivarian Revolution dubbed “XXIst Century Socialism”. Chavez styles himself the leader of Latin America’s anti-free market forces and makes alliances with China, Cuba, Russia, and other rogue states like Belarus, Iran and Libya. During his 14 year tenure, Chavez has persecuted his political adversaries and critics, restricted media freedom, undermined the rule of law and property rights, militarized the government, and tried to destabilize neighboring Colombia, Honduras, and Paraguay. All under the varnish of Democratic processes and the legitimacy afforded him by an electoral system- the National Electoral Council (CNE), which has been systematically automated and is now fully controlled by the executive. To many, the CNE is like a Trojan horse, directed by the Socialist compass, financed by Venezuela’s oil revenues, and commanded by the Cuban regime.

The Chavez regime has been quite efficient at promoting his image and approval rates; cosseted by a “democratic” aura which has been carefully weaved and craftily sustained for the worldwide public opinion. As a result, it is not difficult for Venezuelans to understand how countries with more established democracies have been lulled into believing that Chavez is still now, after 14 years of populist promises and disastrous performance, the “democratically elected” president that his regime so diligently works to portray him as.

The fact is that there are more than 6.5 million Venezuelan who disagree with the regime. The opposing voices that are currently heard come from a coalition of political parties, both traditional and new, which make up nearly all the parties “not aligned” with the regime. This coalition, commonly referred to as the Democratic Unity Table (MUD) is made up of dissident rather than opposing voices, as none of the parties conforming the MUD can offer tangible alternatives to the socialist policies already offered by the government. These parties do not oppose, instead they collaborate and coexist with the establishment. Their “opposition” is limited only to “not agreeing with” what the regime proposes, says, or does; they act only if the administration acts. They question legislation and its results, but they do not question the Socialist model that originates them because its ideological base, like the regime they “oppose” is Socialism. As a result, this “opposition” does not represent all those who are against the government and therefore has been unable to capitalize the bulk of the discontent latent in nearly two thirds of the population who clearly reject not only the regime but also the opposition alliance known as the MUD. The MUD is believed by many to be a pseudo-opposition because it is collaborationist; useful only for legitimizing the regime.

But all is not lost for those who seek a real change; although very small yet, there is true opposition in Venezuela — a movement which aims not only to defeat the chavista regime but also to change the socialist model on which the most of the country’s governments and their oppositions have historically been based. The Libertarian Movement of Venezuela (MDL) was founded in May 2007 in order to bring about a free market economy, small government to Venezuela and put an end to the interventionism and welfare estate[5] which have so brutally marred the country’s civil liberties, private property rights, and prosperity.

Contributed to this report: EBER FLORES