Skype, the widely-used internet chat and call company, is being investigated by Luxembourg’s data protection commissioner over its involvement with PRISM and NSA. If found guilty of breaching Luxembourg’s strict data protection laws, it could face criminal and administrative sanctions as well as hefty fines. As Skype is headquartered in the small European country for tax purposes, Luxembourg has the right to bring these charges against the company.

Skype used to be a symbol of low-cost, private, secure communication in the internet age. Its chat and audio and video calls are encrypted, and have long been thought to be safe from government surveillance. Among is 600+ million users were those who wished to avoid being eavesdropped on, for both legitimate and (allegedly) criminal reasons.

The first cracks in the integrity of Skype’s security appeared in 2005, when the company, recently bought by eBay, launched a Chinese version of Skype. This version, unsurprisingly, had an inbuilt surveillance element, which allowed the Chinese government to monitor chat windows for keywords and phrases that were deemed “subversive”. At the same time, the company began a secret initiative, “Project Chess”, which explored ways to make calls available to governments upon request.

In 2006, Skype was bought from eBay by a group of investors, including a number of US companies. According to documents leaked by Edward Snowden, it was then that Skype began to be integrated into the NSA’s PRISM program. However, the first “eavesdropped” Skype call occurred in early 2011, days after Skype was served with a directive to comply with NSA surveillance. After Skype was bought by Microsoft later that year, compliance with NSA continued, and indeed amplified.

In addition, group video calls and instant messages are obtainable by law enforcement, according to Skype’s corporate vice president, Mark Gillett, because they are routed through its central servers. However, audio and one-to-one video calls were encrypted and do not pass through central serves.

While NSA access to at least a subset of Skype calls is evident, it is unclear whether agencies outside the US have similar levels of access.

I don’t think I need to stress how sad it is when something long considered trustworthy is found to be anything but. Skype for years was the fresher, better, freer alternative to the telephone, not so easily subverted by governments for their nefarious purposes. And now it’s just another tool in the anti-freedom and anti-privacy arsenal of the modern state.

On the bright side, new services, such as Silent Circle, are being set up as, hopefully, more secure alternatives. 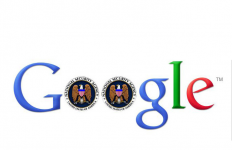 NSA pretends to be Google, steals your data→