Browse: Home / IPCC are sticking to their guns and their models

The United Nations’ Intergovernmental Pannel on Climate Change (IPCC) have published a new Summary for Policymakers (SMP), firmly pinning the blame for climate change on human activity. The statement is there is 95% certainty that over half of the warming of past half-century is due to humans. The main cause - release of carbon dioxide from the burning of fossil fuels. The SPM asserts that each of the last three decades has been successively warmer at the Earth’s surface than any preceding decade since 1850. The IPCC even state that it is “likely” that these decades have been the hottest in the Northern Hemisphere in the last 1400 years, above and beyond the Medieval Hot Period.

Unsurprisingly, but very sadly, the report did not even attempt to address the fact that in the last 15 years (1998 to 2013) global temperatures have not been rising, contrary to the majority of models espoused by the IPCC. This fact was simply brushed off as “natural variability”, and that short-term records are sensitive to picking start dates. I personally think that is not sufficient explanation, and a glaring cop-out that climate change skeptics are right to point out.

So what about the models the IPCC loves so much? An article in Nature Climate Change asserts that these models cannot adequately simulate climate trends For example, in the paper the researchers stated that over the last 20 years, temperatures rose by 0.14 ± 0.06 °C per decade, whereas the models suggested more than twice the rate. For the painfully static 1998-2013 period, the models predicted a trend of 0.21 ± 0.03 °C rise per decade, but the reality was 0.05 ± 0.08 °C. Yes, the standard error is such that any changes in temperature are insignificant.

So, apart from blaming progress and defending their beloved models, what else did the IPCC say? Another point in the SMP is climate sensitivity, loosely defined as how much warming doubling the carbon dioxide in the atmosphere would produce. This report states that this climate sensitivity is at least 66% likely to be between 1.5 °C and 4.5 °C. This is contrary to some recent studies, including one in Nature Geoscience, which produces a lower interval of 1.2 °C to 3.9 °C. What this the significance of this? Well, lower climate sensitivity would mean that the world is warming up slower and there’s less need for alarmism.

Can we expect any change in policy from these revelations? Unlikely. Whether or not anthropogenic global warming is happening and whether or not we can actually do anything about it, it is far too good of an excuse to oppress, tax and regulate. Creating crises with vague, faraway “enemies” has long been used by governments to rule the populace.

GM food is good for you→ 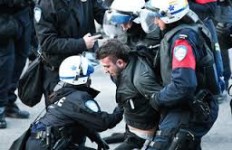